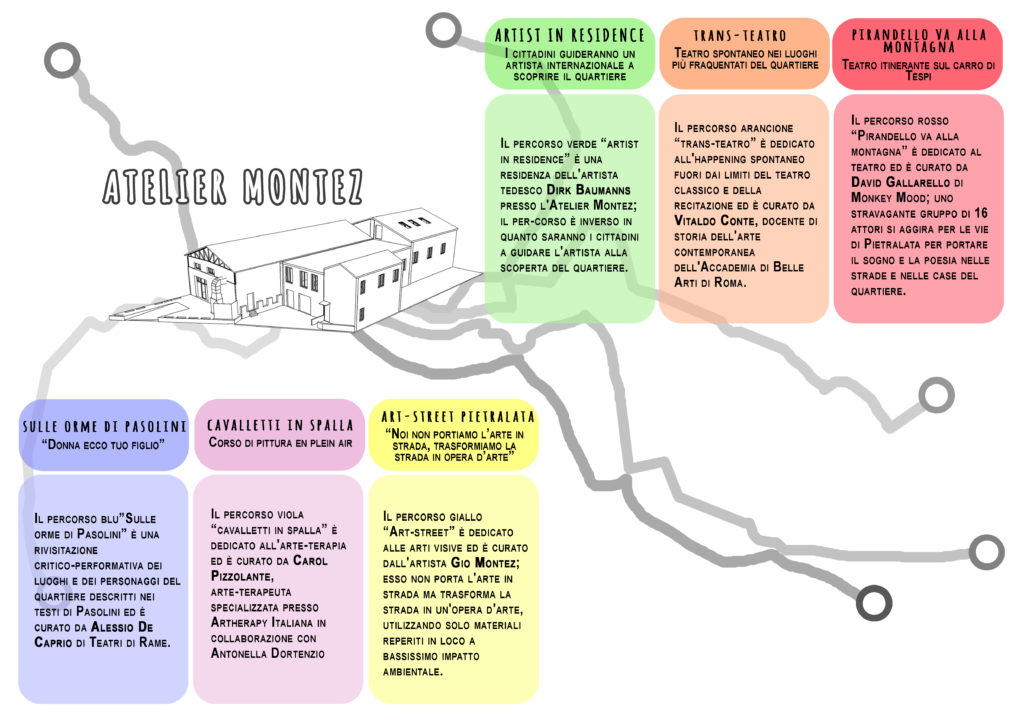 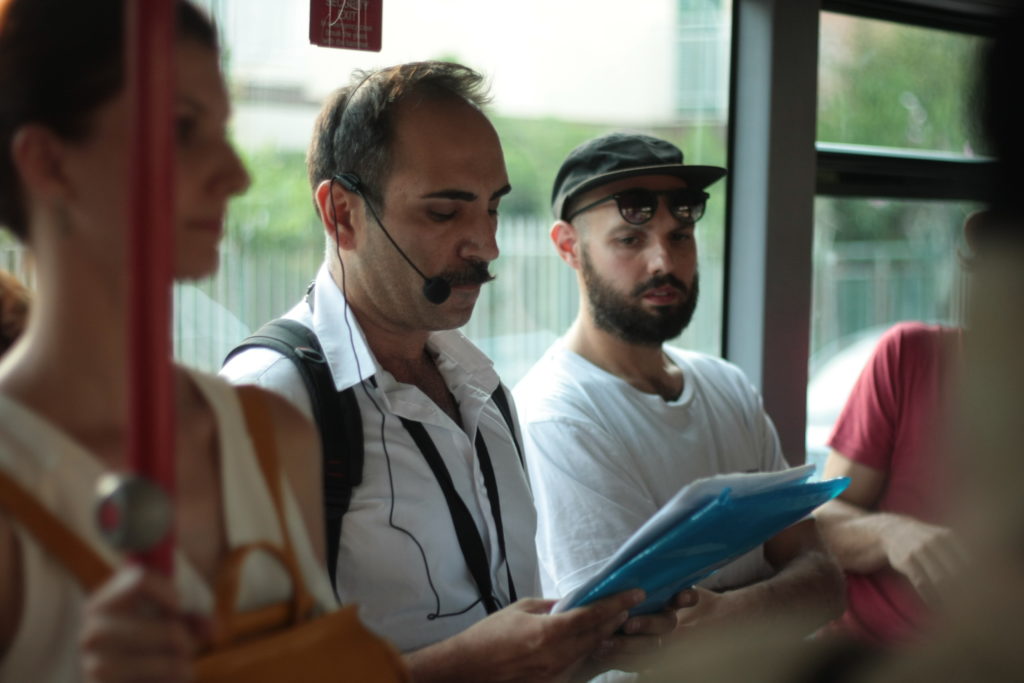 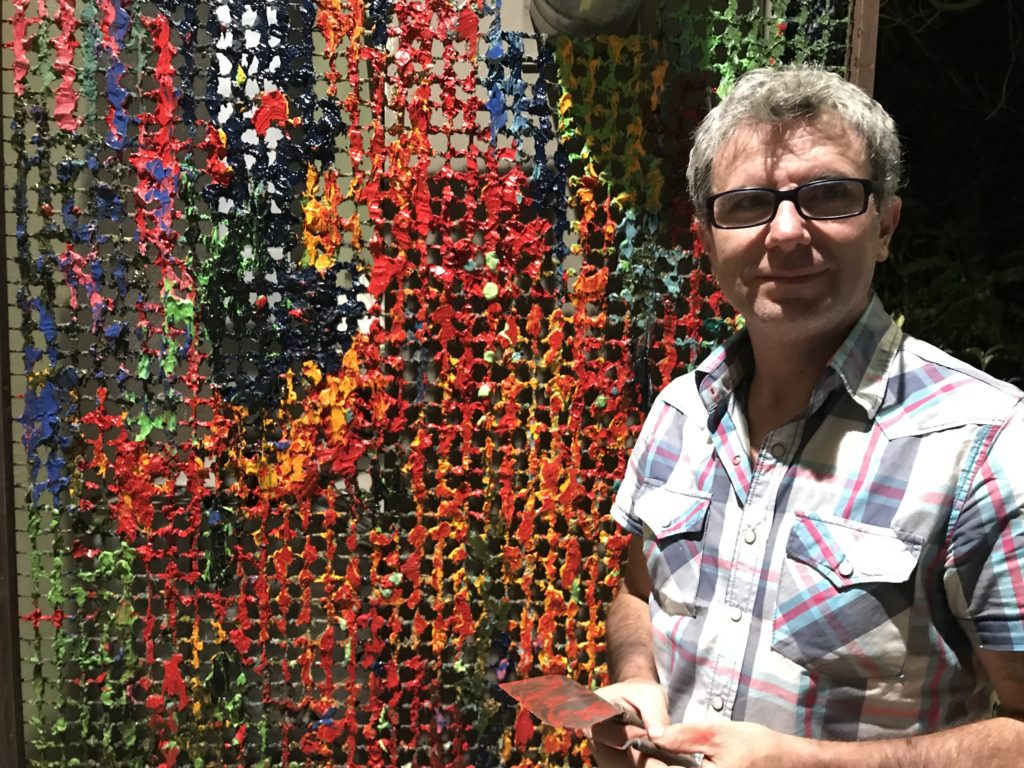 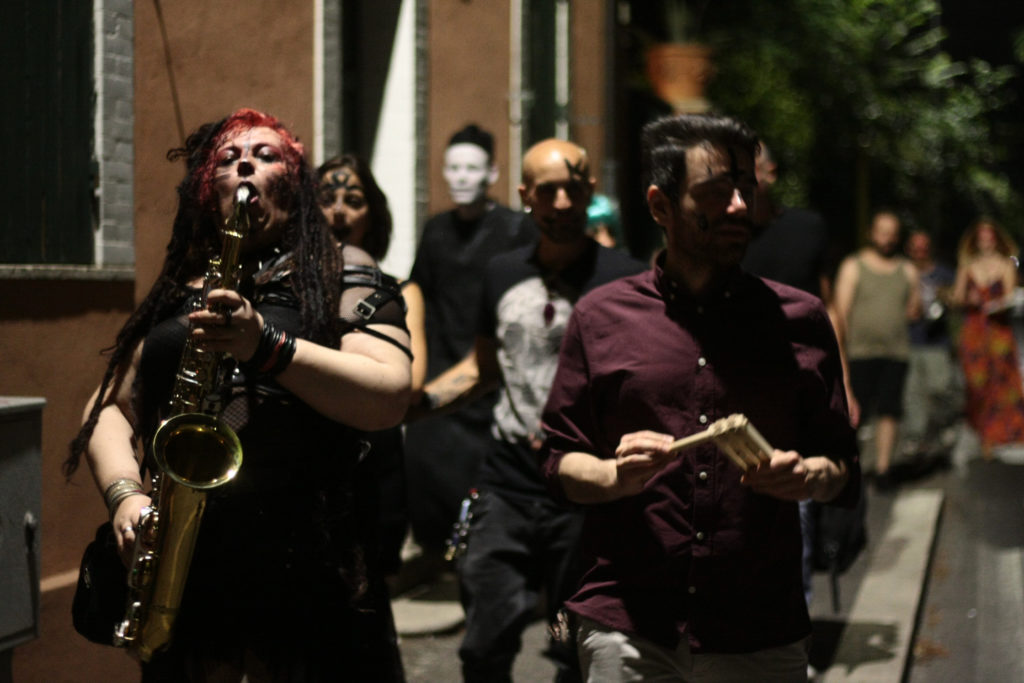 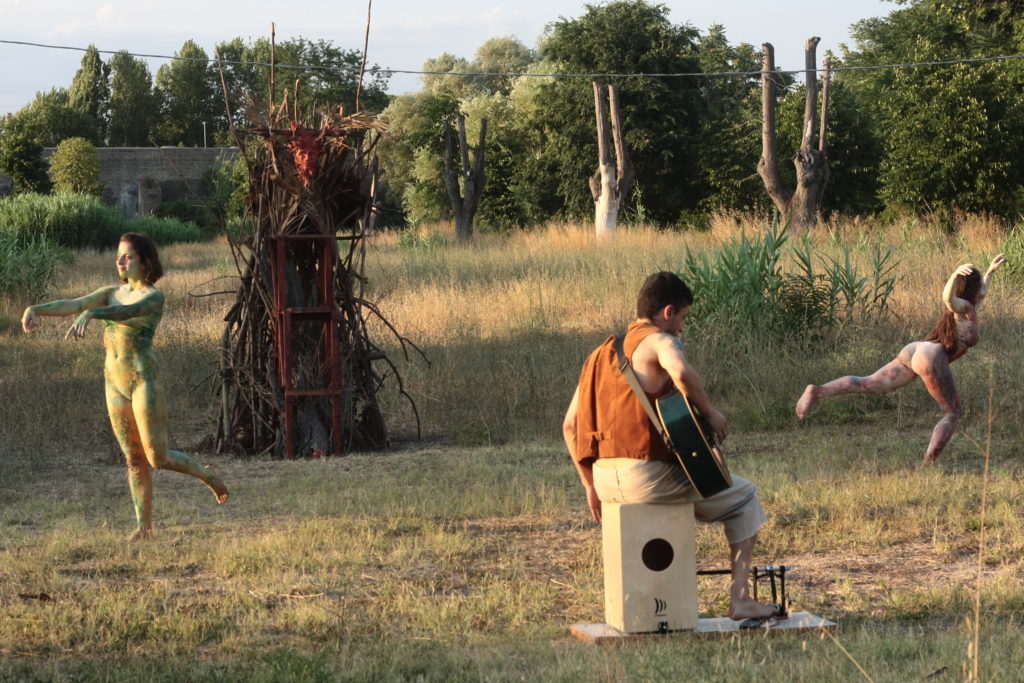 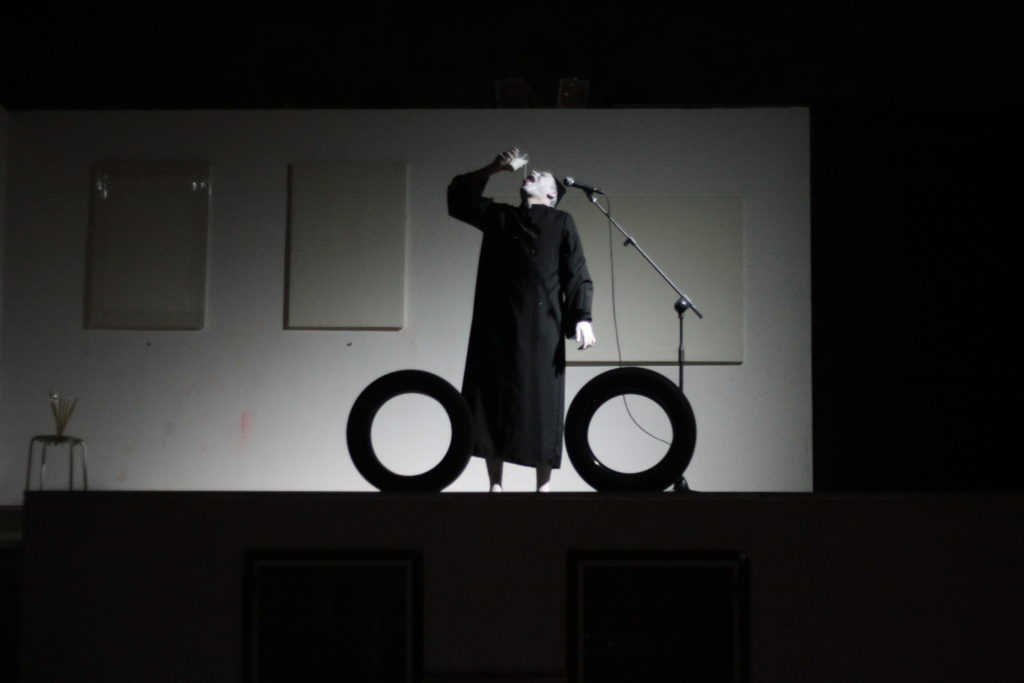 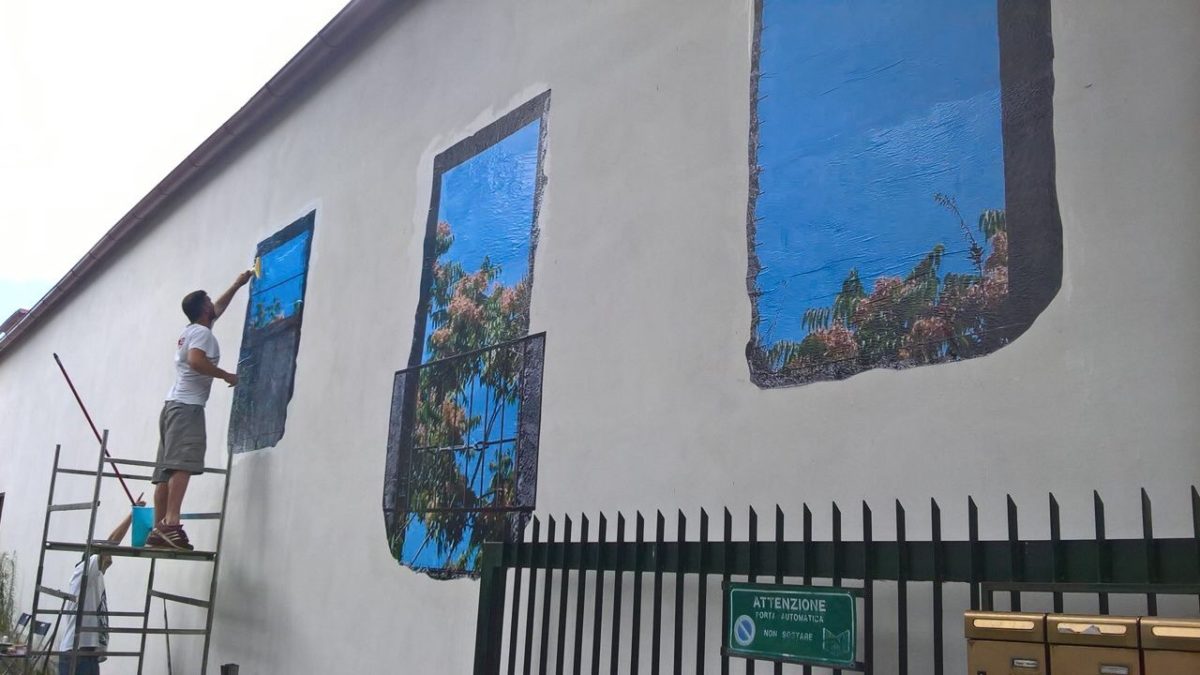 For art courses in the Aniene Valley Cultural District

Rome, 1st July 2017, via di Pietralata becomes “PIETRALARTE”. Atelier Montez participates with its initiative in the Roman Summer program promoted by Roma Capitale – Department of Cultural Growth and created in collaboration with SIAE,  transforming the street into a work of art;
The proposal of the art courses that branch off around the Montez Atelier originated from a chat with his friend and artist Marco Fioramanti about the broken lenses of his glasses; the image I am referring to is also published on the cover of a recent edition of “Night Italia”. At that time I had just bought a nice pair of glasses with blue lenses and a very light frame, which you hardly notice you have them on your nose, which made me see the world as if it were an Ives Klein painting. Here, with the wind in the stern and the Roman Summer at the gates, I felt like this: Light.

As our meritorious Italo Calvino suggests, it is possible to escape “the heaviness, opacity and inertia of the modern world” with lightness; this is how we wanted to devise a project compatible with an extremely complex mixed territory, partially protected by the landscape constraint for the nature reserve to which access is forbidden; a neighborhood in which the absence of infrastructures such as pavements and equipped green areas and the usual daytime desolation of the Roman suburbs, combined with the oversized influx of people for the  nightlife nocturnal, make it very difficult to organize cultural events without causing problems of public order. In fact, when the Capitoline Administration called us to communicate the good news that PIETRALARTE had liked it and would be included in the projects to be financed, they added that they had some doubts about the way the initiative was carried out. It was not clear how a demonstration that affects an entire neighborhood throughout the summer period did not need concessions for the occupation of public land. Such a thing had never been heard before. We explained that no audio structures or systems will be installed outside the Montez Atelier and no barriers, fences or deviations of any kind will be built. There are no chemical toilets, peddlers of sausages or mounds of waste. Pietralata remains Pietralata, always the same as itself, as our Pier Paolo Pasolini reflected almost fifty years ago.

“Pietralarte [instead] is a mental thing”, Leonardo Da Vinci would still say today, an intelligent completion of the limited phenomenal reality.

The way in which the “usual route” is used will change more than anything else; the experience lived as a game, a “hidden treasure hunt” which will have the purpose of educating the citizen to the vision and contemplation of beauty in everyday things, in things that belong to his or her daily life dimension.

“We do not bring art to the street but we transform the street into a work of art” is precisely the motto with which we invite the artists to carry out the interventions.

The initiative is mainly aimed at a local public, who travels these streets every day, to go to work or to take their children to school and to the pool. It will be possible to experience an original point of view on everyday things, living a different experience of the circumstances through special vision devices, guided courses and temporary “ghost” installations, that is with a very low environmental impact and composed exclusively of biodegradable materials that they will gradually disappear from circulation over the course of this summer.

We will make available a MAP (Magazine), which will not be the magnificent Pietralata Contemporary Art Museum dreamed of by Turi Sottile; we will have to be content with working with a little imagination, as our ancestors did in a still unknown world, to be explored with the help of some information and a map; and do not be afraid of losing the right path when you find yourself enchanted to marvel at this great nothing! Finally, all the roads lead to Rome, as well as all the paths will converge in PIETRALARTE – the Festival in the final four days of the event, during which the hunted treasures will be exhibited and all the artists and musicians who join the event will perform.
We therefore invite you to visit the  factory Atelier Montez and to participate in the gentrification process in progress in the Pietralata district. Grab a MAP immediately (or download it from the website  www.montez.it ) which will guide you at any time of day or night through the art courses created especially for you. Contemplate the territory with the artist’s glasses, have new experiences and get involved in this open air  film  entitled “PIETRALARTE”.